Agrigola hit the shelves at Eudemonia last Thursday. We were very excited. We had ordered 30 copies because we expect the demand to be very high. Here’s why: it’s already rated 2nd only to the venerable Puerto Rico on boardgamegeek, and up ’til this month it was only available in Germany. Buzz abounds. 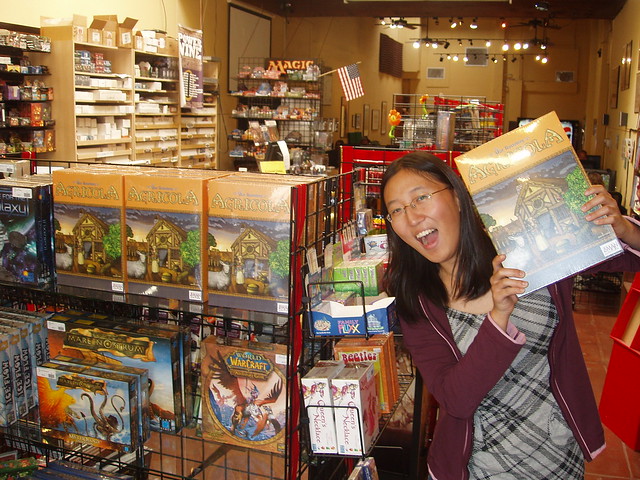 As soon as Dean cracked open the boxes and stocked them 3 deep, he demanded we sit down and play. We acquired Jon, Jefferey and Jean (Gene?) and Jeff taught it to us. He says he taught Agricola 5 times that week already.

It is a fun game.

It’s set just after the plague ravaged all the land. You and your spouse have a two-room farmhouse made of wood. (I noticed that on the internet and in general descriptions, it says “you’re a farmer and you have a wife.” When the berkeley board gamers were teaching it to us, though, they said “you start out as a … couple. this is you and your… spouse” … hahaha. I fucking love Berkeley. I honestly could never live anywhere else.) You have this plot of land that’s your very own, and your goal is to make the most efficient farm possible.

Each person has their own little game board to build on, so unlike settlers, it’s not about fighting for territory. The competition part comes into play with the “Actions,” which are the things that you can do during a turn. There aren’t that many Actions on the board, and each “person” on the board can only perform one action, and each Action can only be performed once a turn. So the PLAYERS take turns putting their little farmer-dudes on action cards, claiming them, and then at the end of the round, all the Actions resolve simultaneously. Actions include things like “till the land” (which lets you put a plot onto your farm), “build fences” (which lets you make pastures), “get a cow/sheep/wild boar,” “augment family” (which means make a baby, bow chicka wow wow), “augment house” (build a room onto your house… you can only have a baby when you have room for it in your house)… and so on. There are also Actions that are just “take 3 wood” and such–they’re resource acquisition.

Every 2-3 rounds, there’s a harvest, where you’ve got to come up with enough food to feed your family and your livestock reproduces. You also harvest grain/vegetables from your seeded plots. At the end of 14 rounds, the game ends, and everyone tallies up their scores by counting features of their farms.

Here are the results of my first game: 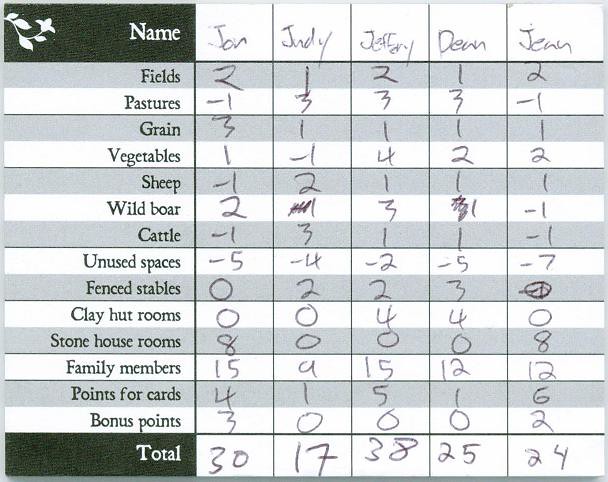 Not surprising I came in with pretty much the worst score ever, considering my oft-mentioned lack of aggressiveness and my propensity for playing every game like a sim. I just wanted to build up my nice herd of cows. COWS!!!!! I went for cows and not sheep? What was I thinking? I LOVE sheep.

Of note: this game’s concept is incredibly adorable. Our games come with the basics: there are tiny wooden cubes for the livestock, and tiny round wooden pieces for the resources. If you pre-ordered Agricola directly from the publisher, you got Animeeple–cute wooden pieces cut out in animal shapes instead of plain cubes. That’s not even as far as it goes, though. Jeff showed us a picture of the models his wife made out of Sculpee, and they’re pretty much the cutest thing ever. So naturally I came home and looked up what other people are doing and creating your own Animeeple is the new craze. People on the internet are amazing.

Here is just a sample of the deliciously adorable animeeple on boardgamegeek:

Incredible. When I make my own set, I will do my part as an advocate of marriage equality. Hahahhahahahhahaha.

x-posted to the eudemonia blog. http://www.eudemonia.net/blog/?q=node/3