Article here at the new york times on Beijing city officials trying to clean up the city in preparation for the Olympics. There’s a brigade to fix signage like: 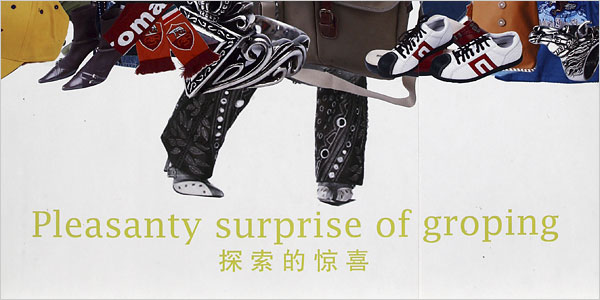 And there are ceremonies that only make sense to the Chinese, such as:

Last week, the city commemorated “Queuing Day,” an event held on the 11th of every month because the date symbolizes an orderly line. Volunteers wearing satin Queuing Day sashes shooed rush-hour commuters into lines at busy subway stations, while hospital administrators and a few city officials handed out long-stemmed roses to patients who stood in line to pay their bills or pick up medicines. Local news media swarmed the event.

“This is to encourage people,” said Zhang Xin, 30, an expectant mother, clutching her flower as she left Beijing Hospital after her pregnancy checkup.

Chen Chunfang, one of the hospital administrators, summed up the purpose succinctly. “The Olympics are coming, and everyone wants to show their best,” she said.

I LOVE that. 11th day because 11 looks like an orderly line. Captures in one idea all kinds of things that are sort of related to puns, language, the written word and how it affects ideas, the sense of humor/seriousness that people use with official things, propoganda, the mixture of national pride and national shame that are swirling around what you could call Chinese culture, or whatever.