i want a vocoder, and a whatever-it-is that enables live-looping (laptop connected to footpedals?), and a sparkly box full of electronic equipment shaped like a piano 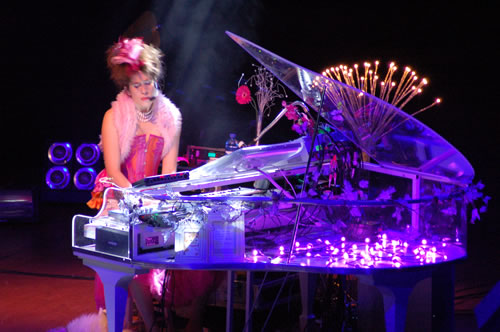 on saturday, suz brought me to a football game. it was fun. we won. http://calbears.cstv.com/sports/m-footbl/recaps/110406aab.html
i like being part of a stadiumful of mass adulation. football is pretty boring–thus you have commentators to amuse you if you’re at home watching it by yourself, or if you’re there you bring friends and chat away, and follow the directions of the stout people on the field holding up signs that say “NOISE” and hoot and cheer. ucla’s support entourage included two cheerleading sections (one like ours–all women with poms and skirts, and the other with giant long megaphones, all tumblers, in pants, who did stunts, which we don’t have; i wonder if they still call them song and cheer), a juggler that ran around in front of their band, a 10 or 12 piece colorguard as part of their band formation thingy, and four people to carry flags that spelled out UCLA. whenever they scored, those four flag carriers ran across their endzone and then the tumblers would roundoff handspring backflip across. suzanne even saw a whip (which is like a backflip in that your hands don’t touch the ground but not in that you go lateral (like a handspring) instead of vertical). so once when we scored, people from our band ran down to our endzone, and then all the way up the side of the field to their endzone, where they flopped around and threw themselves on the ground to make fun of them. that was amusing.
how does the student section do that holding-up-pieces-of-colorful-paper thing at halftime? it’s so speedy, and so perfect! someone said they call out numbers.
marching bands are really boring if you don’t know the songs (and if you can hear them at all in the first place, which we couldn’t). even though their formations are so cool.
once the people manning the net on our endzone couldn’t get it up in time for a field goal so people in the stands far below us caught a football.
at one point we got a touchdown, and amidst the cheering people slowly realized there were two down on the other side of the field, one from each side. the cal one got up eventually and was ok. the ucla one got up, started jogging, and fell down again. that was a little worrisome but he got up after a while and slowly moved off the field, too.
there were some pretty exciting touchdowns where the carrier saw an opening and went straight through it, snapping around in circles to shake off defenders.
the alumni section tried to start a wave but it failed after six or so really pathetic go-rounds and then ucla scored. that was a low point in the experience.
suz and mike made delicious chai (because they had it a lot in india and missed it after coming home) and brought it in a thermos.

the three of us ate at cancun and then we learned that if it’s 10:30pm and you’re slightly bored and want something to do but are pretty tired, don’t play seafarers. but it was fun anyway; they’d never played seafarers (but love settlers) and as an added bonus we played the “discover unknown lands as you build ships” version. i mercilessly cut off suzanne’s quest for the gold hex at the end with my glorious great wall of judy, racking up 10/12 points… but development cards led the way to suz’s victory soon after, despite/because of her lack of wood the entire game. three victory point cards and largest army!

i’m too sensitive to watch borat for long. i don’t do well with abrasion

apparently starlight is a “radio single” in the US right now? i’m going to learn about calling in requests. i’ve never called a radio station before save that one time in 7th grade when anna told me to becuase she’d won something from them the week before (i didn’t win anything). i can dedicate it to ryan even though he won’t hear it because he is far away. chasing starlight. until the end of his life. IIII JUST WANTED TO HOOOOOOOOLD

Then a great beauty was revealed in him, so that all who after came there looked on him in wonder; for they saw that the grace of his youth, and the valour of his manhood, and the wisdom and majesty of his age were blended together. And long there he lay, an image of the splendour of the Kings of Men in glory undimmed before the breaking of the world.

that’s my favorite phrase. god, it just breaks your heart. it’s from appendix A(v), the tale of aragorn and arwen, and i’m glad they worked it into the movie, even if it was a fake scene between elrond and his daughter. i think i’ve only seen the movie once, and before i read the book, but that’s a moment that popped out and i was so happy to see the unforgettable phrase in the appendix

i really love fantasy and period things and long mantles of blue and silver set with stars along the hem and collar made for faramir’s mother, an emblem of beauty and grace and first grief for she died young, even though i don’t really even know what mantles are (are they capes? cloaks? robes?). i have a cloak! it’s black and thick and has a (fake) furry collar. my mom got it for me for proms. i should totally bring it up and wear it around